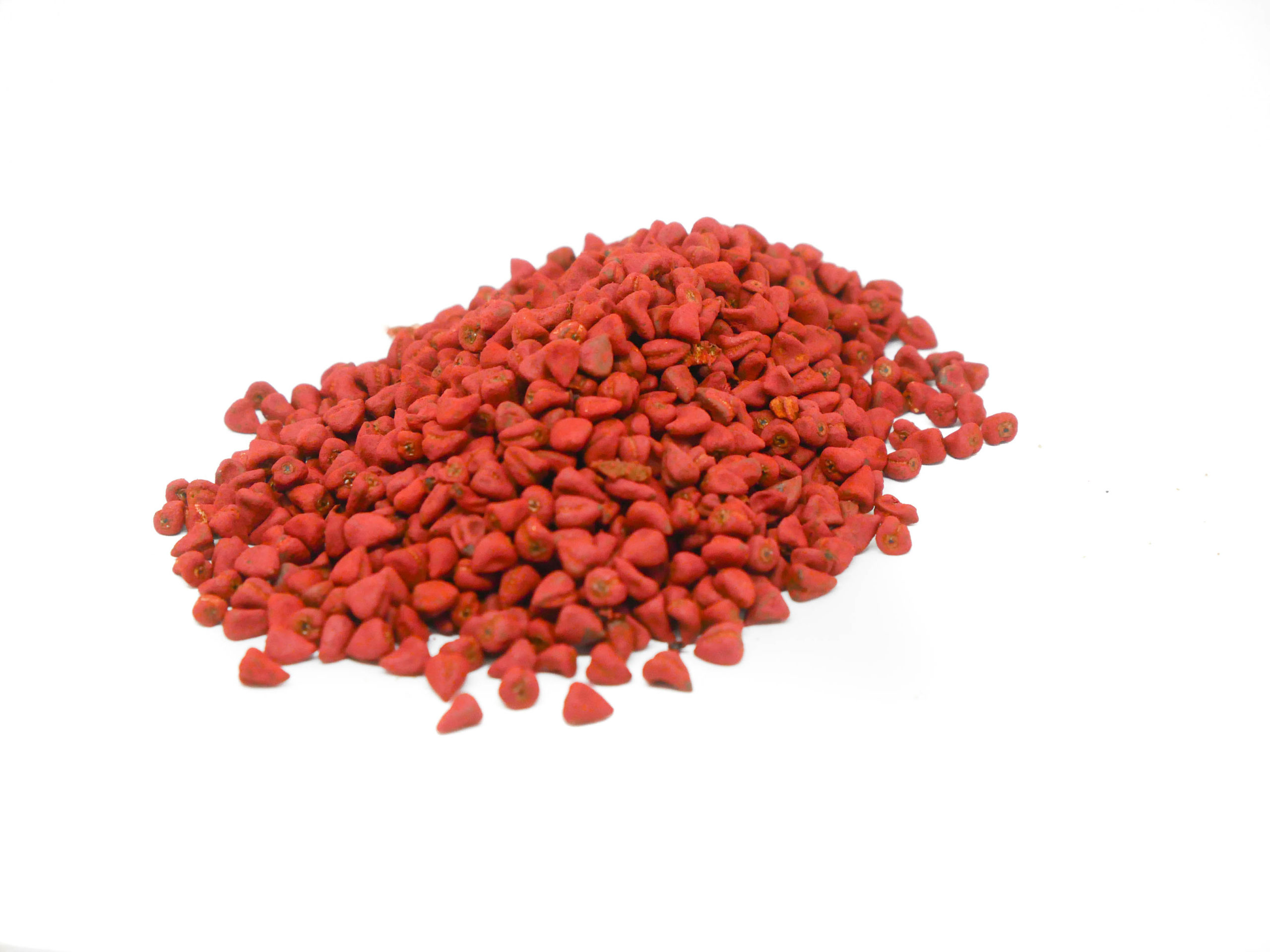 Annatto powder is used in so many cultures, yet remains often overlooked and forgotten about. This ingredient comes from the tropical achiote tree, and its bright yellowy-orange hue lends itself to use as a food dye. It also possesses medicinal purposes and is a common spice used in many Latin American foods , along with Caribbean and Filipino cuisines. It’s often used in soups, stews, sauces, and marinades where it lends a sweet, peppery taste.

Most Common Use: food dye and seasoning

Annatto is the seed or extract of the achiote tree, which is indigenous to Central America and South America, Mexico, and the Caribbean. Achiote powder and annatto powder are commonly interchanged. The natural hues can range from yellow to dark orange when used as a dye, although the seeds are a deep, bright orange-red. The annatto seed and pulp have been used for hundreds of years by locals and natives for a variety of purposes and are used heavily in Latin America as a coloring agent, for medicinal purposes, and as a spice in many dishes.

The fruit of the achiote tree is covered with think, spiky hairs and heart shaped. Mature fruit pod can be easily opened by hand revealing their red seeds. These seeds can then be turned into achiote paste, ground into a annatto seed powder, or infused into oil. The edible dye is commonly extracted for commercial use.

History tells us that annatto transitioned from primarily being uses as a dye to a kitchen stable when Europeans who arrived in the Americas. Saffron was the primary source to “tinting” their food and instead resorted to using annatto.

Did you know Annatto is responsible for the yellow color of butter, margarine, and cheese? All of these would be a pale creamy color without the addition of this natural dye. During the 1800’s annatto was used commonly to give Cheddar cheese it’s classic orange color. It was thought that the color of high-quality cheeses came from the presence of beta-carotene from higher quality green grass fed to cattle. It seems ironic that today, many people now assume the bright yellow color comes from unnatural ingredients and is not an indication of high-quality cheese.

You’d be surprised to learn that annatto is also used as a coloring agent in processed meat, beverages, smoked fish, and a variety of packaged foods. Annatto is also utilized in cosmetics for its strong hue, hence the nickname “the lipstick tree.”

How to Cook With Annatto

Some of the most common practices for cooking with annatto is to steep it in oil or using ground annatto powder rather than the whole annatto seeds. Annatto is a critical aspect in many Latin American dishes . Annatto paste is very popular and easy to use in many of your favorite dishes. All you need to do is take a small amount of Annatto paste and mix it with some water. You can sprinkle Annatto powder on anything you are cooking just like you would with any other dried herb or ground spice. If you’d like to use it as a dye and you have access to dried annatto seeds, you can soaked them in hot water until they give off their color, or you can fry them in a neutral oil such as canola or vegetable oil and strain off color prior to using them in food.

Annatto‘s flavor is often described as musky, slightly peppery, and earthy. You can sometimes catch a hint of sweet, floral nutmeg .

Check back here soon for recipes and more from The Natural Spot! If you’re adding it to your dishes and improvising, we advise adding it during the beginning of the cooking process.

Where to Buy Annatto

You can buy it here! Annatto is not a common ingredient in American cuisine, so it can be difficult to locate these colorful seeds in grocery stores. Since we’re not your average spice store, we’ve made it our mission to provide unique spices from around the world, including annatto!

Keep your annatto powder in a safe, dry, dark area (like your kitchen pantry or spice cabinet) and you won’t have to worry about it going bad for up to 3 years. Keeping it in one of our airtight jars will help extend the life of your precious spices even longer!

Be the first to review “Annatto” Cancel reply